You’re Only As Good As Your People 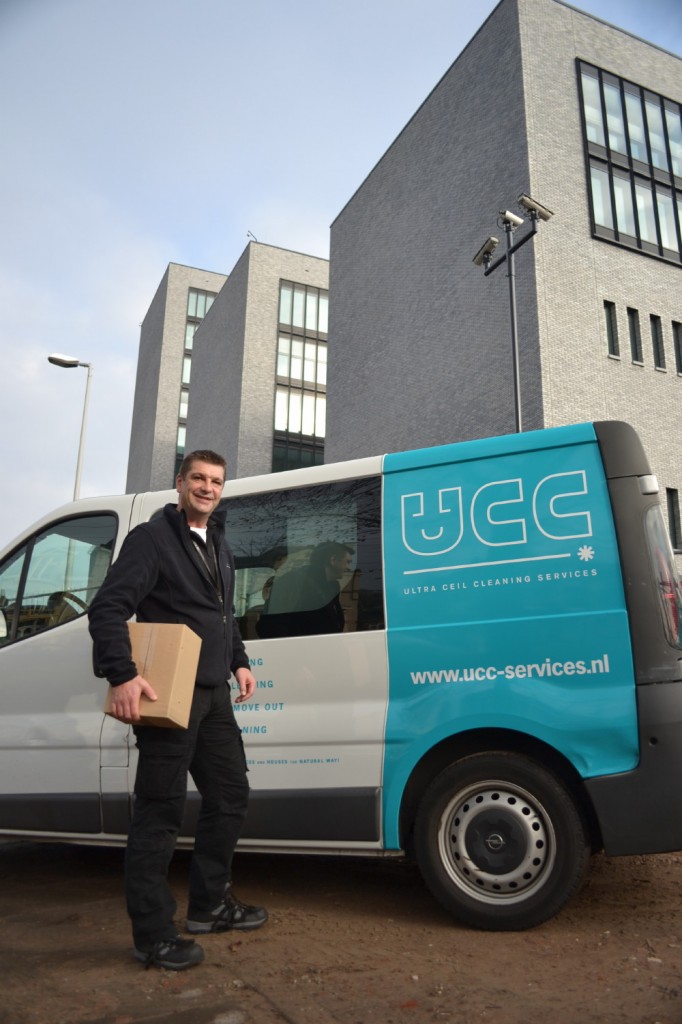 As I enter Café Rembrandt at Schiphol airport, I’m waved over to a table in the back corner by a burly, dark-haired man. This is Andrew Barker, the expat entrepreneur behind Ultra Ceil Cleaning Services (UCC).

He shoots out of his chair to greet me, urging me to “take a seat, Mate.” We each order a coffee (the empty cup in front of him indicating that this is not his first) and by the time the coffee arrives, I’m furiously scribbling in my notebook as Andy – as he insists I call him – enthusiastically goes on at lightning speed about his experiences starting and running a company in the Netherlands.

Originally from Stafford, England, Andy came to the Netherlands for love. In 1997, he and his Dutch wife made the trek from the UK to the Netherlands in order for her to find better employment, while Andy was able to continue to his career as an aviation dispatcher and load controller, working at Schiphol Airport for ten years.

Initially, he was impressed by the high standard of cleaning in the Netherlands, but over the years he began to notice a visible decline in presentation and cleanliness. He also became aware of a distinct lack of good customer service in the Netherlands – a common complaint amongst Dutch and expats alike. “Good customer service is simple,” he explains. “Do what you say and say what you do.” Another issue he noticed was a general disrespect for cleaners and a tendency to look down on them because of the nature of their work.

With the motto “Change the Philosophy, Change the Environment”, Andy set out to change the world – starting with the Netherlands. When he began UCC just three years ago, that’s exactly what he did. Andy and his team at UCC promise “Service With a Shine”. Even the smiling ‘u’ in the company’s logo indicates to the customer the sheer satisfaction they are in for when they choose to work with UCC.

There was just one problem: what does an aviation dispatcher know about cleaning?

“Google became my best friend that first year,” Andy confesses. He Googled how to clean specific ceiling types, wash walls, clean carpets… whatever skill was needed for the job, he taught himself through Internet research and by participating in a variety of courses. “It was a big gamble,” he laughs.

UCC started as a one-man-show with Andy as the headliner. Jobs consisted mainly of cleaning ceilings and walls, which was, at the time, a service not typically offered in the Netherlands.

“I started UCC during the recession and the first year was tough,” says Andy. “I had hardly any business. It would have been so easy to give up, but my business was something I really believed in.” With his wife supporting him morally and financially, Andy was able to expand upon his business and offer more services. By his second year, it became clear that he needed to take on employees to help shoulder the workload.

By working with employment agencies, Andy was able to find his first employees. From there, new hires began coming to him via word of mouth. As an employer, it’s important to be choosy about who you take on, as your employees represent both you and your company. “You’re only as good as your people,” Andy stresses. If the cleaners at UCC are anything to go by, Andy and his company are in good hands. Happy, confident, personable, and highly social, “Our personnel are respected because they earn respect,” says Andy with a tinge of pride.

Three years on, Andy has expanded his company not only in size, but also in services. From luxury mansions to executive lounges, from apartment buildings to offices, UCC has certainly made its mark here in the Netherlands, handling everything from daily office cleans, ceilings, floors, carpets, and walls to post-construction and fire damage cleans.

Andy has set up a truly quintessential expat business with UCC. In addition to conducting all business in the English language, most of UCC employees are expats themselves, coming from England, Poland, Czech Republic and Slovakia, and Brazil. Even the top-of-the-line cleaning equipment comes from outside of the Netherlands, being imported from England. The next step is to become the official distributor of state-of-the-art cleaning machines and solutions in the Netherlands.

Though Andy describes starting a business in the Netherlands as a quick and easy process with very few hiccups, he sites the language barrier as being the biggest hurdle. That’s why Andy feels it is so important for successful expat entrepreneurs to share what they know to help those just starting out or thinking about taking the leap into entrepreneurship.