From the Point of View of… Brad Taylor 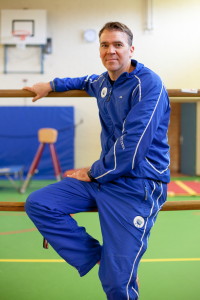 As Brad Taylor, Physical Education teacher, strides down the school hallways, the students respectfully make way, but with a smile. He addresses them in English – for he teaches at a bilingual school – and, depending on how confident his students feel about their command of the English language, they respond either politely monosyllabically or using several sentences. One thing is sure; they’re happy to see him. Yet when he tells everyone to tone it down and respect the need for silence in the hallways, the effect is immediate. Within seconds, everyone is quietly off to where they should be, even moving at a reasonable speed. “Hey Brad,” says one last student, “what about the project?” “Right,” he answers, “you have one more week!” With a twinkle in his eye, he explains that this is nothing official; he has simply invited a number of creative students to paint the ski cargo box that goes on the roof of his car, “They have a good time, and I have a one-of-a-kind ski box!”

Brad studied Child Psychology in San Diego, specializing in Abnormal (Criminal) Psychology. After that he went to work for the city’s probation department – which had him visiting the ‘nastier’ city neighborhoods. “Lots of gang work, poverty, crime and drug use. I also worked in a group home in San Diego with delinquent teenagers. A lot of these kids, at least in that situation, live in a house with four other kids and nobody knows who their dad is, mom’s cracked out someplace and they’re thinking ‘man, if I go to jail, all my homies are there, I got food, I got a warm shower, I got a place to sleep, I’m safe, I get my street credit…’ They’re weighing a new jail against an old ghetto… It’s a tough environment.”

As he talks about those days, I notice that he refers to ‘paying a house call’ with several police cars. Having spent my adolescence outside the U.S., I am always a bit surprised at the number of police cars you will find at a sometimes seemingly ordinary scene. Brad understands what I mean, and explains: “If we were going into a house where we thought they’d be ‘dirty’, we’d roll in with three or four cars. If you show up with enough presence right up front, there won’t be a problem. If they think you’re weak, it could escalate. And then, instead of needing four cars, you need ten. So why not come in with four? If you come with a vast majority or supremacy, everyone will know where it’s at. And the interaction that follows is very different.” But it’s true, he says, that this is at a level that they’re not used to here in Holland. “Kanaleneiland in Utrecht is not pleasant. Still you can walk there at night – though they might yell at you. But you don’t need to go in with armored patrol.”

In the nineties, he met his future – Dutch – wife. “Meeting a girl in the U.S. is such a complicated game, so I loved her Dutch directness. She was so down-to-earth, real and open. Shall we meet again? Sure. Can I have your number? Of course. Shall we meet again tomorrow? Sounds great. None of the wondering how many days you’re supposed to wait, or the playing hard to get. It was a relief.” After a while, they decided to move to the Netherlands; “She was starting to miss her family and for me, whether I flew from San Diego to visit my parents, or from Europe… The travel time was about the same and so was the price of the ticket.”

Once here, Brad got a job as a Physical Education teacher at an international school and then went on to obtain his Dutch teacher’s degree. But first he had to get used to the language. “The first two years are difficult. You have to adapt and learn the language – otherwise you are left out on the jokes, for instance, when standing in line at the supermarket. If you can’t follow the jokes, you are not part of the society. And you have to know who André Hazes is and learn his songs, so that when you go to a bar you can sing along with at least three of them. After those first two years, I could follow and participate.” Still, it took him a while to feel completely satisfied: “Part of how I communicate is sarcastic and quick. This is hard to do in a new language and for a long time, I lost a lot of my personality.”

Brad comments: “Though all layers of Dutch society speak an impressive amount of English, what they need to learn is that when translated into English, their way of speaking can be very rude or inappropriate. What may sound mild in their own language can come across is insolent in another. Also, I explain to the kids in school that English swearwords may seem inoffensive when using them here, but they are unacceptable when actually used in English. Kids in the U.S. would never get away with the use of English swearwords like they do here.”

Speaking of teaching in Dutch schools, does Brad see a difference between kids in the Netherlands and kids in the U.S.? “When it comes to their relationship with teachers I’d say that in the U.S. it is more rigid; there is more of a defining line between students and teachers. In the Netherlands, there is more freedom, but also more respect. The students see the teachers almost as friends, people they can approach. They feel free to come to us with other ideas and creative solutions when we give them an assignment. Already at a young age, you can tell that the Dutch have a certain mental flexibility because they are used to adapting – to other cultures, other languages… The people here think out of the box and are always looking for that new thing.”

Brad goes on to say: “Some of the happiest kids live in the Netherlands. I think that, in part, this is because of the freedom they have here, and in part, because of the energy their parents stick into them. Sometimes this means they are spoiled and I’ve noticed that parents tend to get into a discussion with their children, when what they should do is just be clear and say; ‘I am a parent for a reason and I will make the choice that is best for you’. On the other hand, it doesn’t matter if the rain is coming down in buckets; the kids will put on their rain coat, get on their bikes and ride those 12 kilometers to school, and at the end of the day, they’ll ride those 12 kilometers back.”

What type of school would Brad recommend to expat parents; a local or an international school? “If they were to come here six or seven years, I’d say: a local school. The kids get to mingle with kids in their own environment, they play sports together with kids they know from the classroom and when there’s a party… there’s more than just one other kid from school. And the level of education is at least as good as what they would get back home.” He adds, “The drawback of an international school is mainly the social instability and the lack of consistency. Your friends come and go and sometimes you come to school to find an empty desk and they tell you ‘his father lost his job, they’ve gone back home.’ That’s not good. Plus, if the kid is about to move away, it’s so easy to say: ‘ah, we’re leaving in four months, why would I do my best?’”

Having gone to school in the U.S. – more specifically; Orlando, Fla., Montgomery, Ala., Washington, DC and El Paso, Tex. – how do the two educational systems compare? “I have the idea that the subjects overlap a little more here. Subjects that are covered in Geography, come back in History and subjects that are covered in Economics come back in Geography, which gives you more of a bigger picture. Speaking from the point of view of my subject, P.E.; I miss is the whole social aspect of school sports – you know, having a school team that goes out to play football, or baseball, and having a pep rally to support them… this is a degree of social involvement that simply doesn’t exist here.” Another difference is the choice for a particular ‘profile’ that children make when entering 10th grade in the Netherlands; “In the U.S., you start focusing on particular subjects once you’re in college; before that, the program is more general. Here, at age 15, you can already choose to focus on the sciences, or on arts and languages, and you can choose what level of math you’re going to take. Which is better? I don’t know. It seems to me they both work fine.”

Brad teaches at a TTO-school; a Dutch school that offers bilingual (English) education at (in this case) VWO-level. VWO is the six-year high school curriculum that prepares students for university in the Netherlands and generally also qualifies children for universities across the world. At a TTO-school, approximately 75% of the subjects, including Geography, History, Math, PE, and Biology, are taught in English. What are Brad’s views on TTO? “I think it is very important to raise children bilingually – the English they learn here is not something they stop using once they graduate. It opens doors and makes you better qualified for getting a higher education – anywhere in the world. One of our graduates is studying in Colorado now and another in Boston. When they get there, they hit the ground running; they can get right down to the material, without having to cope with grasping the subject in another language. Plus, also here in the Netherlands, more and more university course material is being offered in English. It is a springboard to the future.”

“In school, we have to prepare children for life,” says Brad. “They have to understand that if they don’t learn to work, they’ll lose their jobs and have no money. If they’re having trouble, I sit them down and ask ‘What can I do to help you pass?’ We have to help them see that the future is now. Tell them: ‘You want to be a veterinarian? But you’re failing science! What do you think you need?’ Because I know what I think they need, but that’s not enough: if we can find a way for them to motivate themselves, they will be willing to do the work. They will run. And you won’t have to push.”