From the Point of View of… Sonia Sin 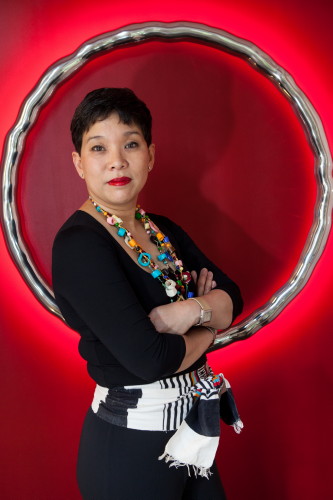 Sonia Sin’s first steps into entrepreneurship were when she founded Service at Work, here in the Netherlands: “I’d be traveling every other month: to Egypt, India, South Africa, Asia – and of course buying all these things that I liked! I’d bring them home, but then I wouldn’t have any time to get my pants shortened, my shoes repaired or my clothes dry-cleaned. So I said to myself, ‘why can’t I figure this out and provide a service for all these busy women like myself?’ I talked with my dry-cleaner, my guy who did my boots – a really old man who looked like a Gepetto from Walt Disney and who used to do the boots for the Queen’s guards – and a Turkish tailor… and they all agreed to go into this with me. Everybody around me was telling me my business was not possible. ‘Sonia, you can’t get into these companies, it’s impossible that people would want this type of service’… everything was impossible. But when people tell me something can’t be done I become more determined than ever to show them that it can. So that’s how I started Service At Work. Within no time, my clients included several embassies, the National Ombudsman, KPN, Exact Software – all the big companies around here.” She gives a wide grin, and says; “People would ask me; ‘What do you do as a business?’ and I realized ‘Oh my God, I’m doing Chinese laundry! It’s genetic!’”

“Before all this, I helped Mexx enter the Egyptian and Indian market in the 1990s, setting up their whole production and acting as licensing manager. Mexx was actually the second western brand to enter Egypt and India – after Benetton,” Sonia tells. “What made this such a challenge was that these countries wanted to protect their own cotton industry and levied prohibitive import tariffs, making it impossible for chains like Mexx to get their clothes in. So how did we solve that? We took all the patterns and concepts of the collections and ‘translated’ these into lighter, local fabrics, as well as appropriate lengths for the skirts – so as not to offend the Muslim religion and their culture. And then we started it up, working with a local architect to get the stores built and with local production people for the fabrics – setting everything up there as it is in Europe.”

When Sonia got pregnant with her second child, she told her husband Frans that everything that she had done for Mexx, she could do for him. “I had been helping him on the sideline, but then I became a full-fledged partner. I helped grow the business from just working with Dutch manufacturers to working worldwide. They want Frans’ talent, but Frans is shy by nature, and he doesn’t toot his own horn,” she explains. “So the relationships and the marketing efforts are my responsibilities. The world is a small place. If you have lived everywhere or have traveled extensively, you realize the world is your oyster and that it is just a matter of how you experience it and how you take it as your own to grow a business.”

Frans founded his company, Studio Schrofer, in 1984. It is an international design studio that specializes in furniture, lighting and interiors. “We design furniture for the industry – for instance, for Leolux, the market leader in the top segment in the Netherlands, or Natuzzi, the world’s largest sofa manufacturer, which is present in 123 countries. Brands such as these will come to us and say ‘there is a shift in the market’, for instance, towards more empty-nesters – older people who want to downsize, but still want to have the same amount of luxury, comfort and quality, or a growing younger segment of the market that wants something more design-oriented, quality-oriented, but also more functional. Or our clients will say; our designs are too old-fashioned and we need more ‘movement’ in our furniture… There’s always move and change in the market that we have to fulfill the need for. We are very innovative and we help our clients profile themselves either differently or in a better light. That’s where we add the value.” Studio Schrofer was appointed Creative Ambassador of the City of The Hague in 2010 – a title that is awarded for life.

Sonia grew up in Park Ridge, Illinois, and came to the Netherlands with her first husband; “But I was very frustrated the first four years, They have a saying in Dutch, you know: ‘If you put your head above the grass field, it will get cut off’ or ‘Act normal and that will be crazy enough’. Most Americans have real difficulties trying to fit in living under these types of cultural philosophies. And, after four years, I said ‘forget it, I’m not going to live like a Dutch person, ‘cause I’m not Dutch and no matter how much I try, I never will be.’ And the truth is, even if you try, you’re really only faking it – so where’s your authenticity? So, I gave that up and accepted myself as the perpetually mixed-up person I am; ABCD: American-Born Chinese, living among the Dutch. I call myself a perpetual misfit.”

Tentatively, I remark that Sonia has a very outgoing type of personality, with the intention of asking whether this is something she acquired over time while traveling the world, or whether it is part of her genetic make-up. She gives a big guffaw and says; “Ya think?!”, but then becomes serious again. “My father was very outgoing, he was a natural-born salesman, but he died of a heart attack when I was 7. Like him, I’m fearless in a lot of things; I’m fearless meeting people, I’m fearless going to countries, and my philosophy is; if you’re in a bad situation, you smile and you laugh and you hope you get out of it in one piece. On the other hand, my mother is a very good businesswoman. She took over my father’s business and was much more successful at it.” Sonia’s father left Hong Kong and her mother left Shanghai to come to America for their studies and their careers and Sonia remarks: “I read in an article a couple of years ago that, genetically, immigrants and their children are a different people. They have to overcome a lot of obstacles; the culture, the language, the country, the whole environment is completely different and they have to be a really strong fish to swim against the oncoming current. And, though I was born and grew up in America, I left, because I never felt at home there. I think, if your parents are perpetual misfits, because they’re always trying to figure things out and you’re always trying to figure things out for them and for yourself – then you never really fit in. For immigrants, it is something that you take as a given; that you have to constantly figure out what is going on. And I decided that, if I’m still trying to figure it all out, well, then I can basically try to figure it out anywhere in the world! It’s same process; what language are they speaking, what food are they eating, what’s their climate like, what’s their religion, what’s their belief, what are their values – it is a constant process. I think that’s also one of the reasons I like marketing; I’m always trying to get my head around another set of circumstances.” The only remaining obstacle is the language, says Sonia (though I beg to differ, I was present at a meeting she attended and her Dutch is excellent); “I’ve done language classes, had great teachers, but I’m really a language idiot. Yet I think speaking a language is the best way to get under people’s skin, to understand their culture better. For instance, when we would visit our clients in Italy, they would have really heated discussions about our designs and I’d think ‘Oh my god, they hate it!’ – but once I learned a little Italian, I realized ‘Oh… they love it!’ So I think it’s really worthwhile to learn as many languages as you can.”

As for the culture; “The famed openmindedness of the Dutch attracted a lot of people, but there’s a good and a bad side to tolerance and it has shifted from ‘acceptance’ to merely ‘putting up with each other’. On the other hand,” Sonia observes; “everyone here can have their say, and can voice an opinion; there are like 12 political parties here – boy, can America learn a lot from that. It’s not just left and right – it’s all the gray in between. I think that’s just fantastic about the Dutch.”

Sonia muses about the title of this interview: “Point of view… I don’t know what my point of view is,” she laughs, “It’s always changing! But that’s because I can always see every point of view. If you want to be innovative, you have to be able to change your mind. You have to be able to understand each other and you have to have multi-faceted brain.” At that point, Frans enters the room. “Frans!” Sonia calls, “what’s my point of view?” Startled, he comes to a halt, a little hesitant, looking as if she’s asked him to show us his bare feet. But he recovers quickly. “You take it by the day,” he says. “You’re always enthusiastic, you’re always openminded, you’re always curious, you like a good challenge.” Sonia nods, pleased, adding: “I dare, that’s what makes life so interesting. I cannot imagine not being like that – there’s so much out there and I can’t wait to get my hands on it!”