From the Point of View of… Kiri and Leonidas Kikis 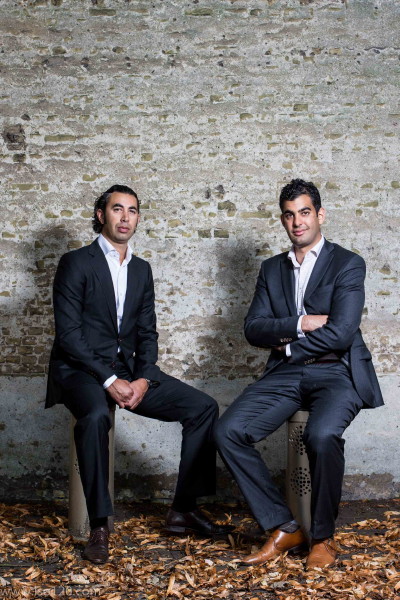 When you first meet the Kikis brothers, you are struck by their almost old-fashioned deferential demeanor; polite, gracious, and gentlemanly, they shake your hand, open the door for you, offer you something to drink, and enquire as to whether you are comfortable. But when you look past the distinguished dark suits and crispy white, pressed shirts you see, beyond the portals of their eyes, their quick, inquisitive minds, and above all; their sense of humor and joy in life.

Kiri is the elder brother, by eight years, and he is the first one who came to the Netherlands. Though they are Cypriots, they were born in Great Yarmouth, Britain, where their parents have a fish restaurant. “We grew up helping in the restaurant,” Kiri says, “and that is definitely where we learned our service-mindedness and communication skills, and how to think on our feet. And we learned that if you work from 9-5, you only achieve so much. If you really want to do something with your life, you have to be passionate about it and be willing to work for it.” Leonidas, the younger brother adds: “Whenever we go back, we help out again. Just this last weekend I was there,” he says, as he makes a gesture of rolling up his sleeves and dipping his arms in soapy water. “We enjoy going back. We have a strong bond with the customers and a lot of them try to come in and see us if they know we’re going to be there. And of course, we love to see our parents; even if we talk with them every day from here.”

How did both brothers end up in the Netherlands? Summarized very shortly: in 1974, Turkey invaded Northern Cyprus and their mother’s family ended up having to flee overnight, leaving everything behind, to the south of the island. From there, their mother went to study in Athens and then on to London, to study Finance and Business Administration. Her sister, their Aunt Tasoula, moved to the Netherlands and was visited frequently by her little nephews. “She gave me my first PC,” Kiri smiles. Eventually, after studying business and finance, followed by marketing, in London, and working in the Netherlands every summer, Kiri came to the Netherlands to work for UPC. Four years later, his brother Leonidas followed.

Over the years, Kiri worked for among others Chello, Shell, Octagon Professionals International, set up and sold his own software company, joined the board of ACCESS and has since founded Kikis Investments, from where he provides consultancy services to international companies in the area of Knowledge Management. Shell is his current client, where he is Senior Analyst; “We promote the internal sharing of knowledge and collaborative working, under the banner of Lessons Learned,” he explains. “We evaluate different projects around the world and facilitate the capturing of these lessons so that we can make sure that the successes of one project end up in another. The aim is to improve standards and guidelines, a technique which can be applied to any global business that wants to improve efficiency and collaboration.” Leonidas, a keen sportsman who played tennis, football and rugby – the latter at a semi-professional level – saw his sports aspirations dashed after tearing the ligaments in his knee, and decided it was time for a change. He joined Kiri in the Netherlands, where he originally planned on staying for only two months. “I was studying business and marketing in England, but decided to join the recruitment world and fell in love with it quickly.” Joining Octagon Professionals International, he found that “there was a lot happening in the market back then. It was an interesting time to learn the business and I had very supportive mentors. I’ve done everything from A to Z in recruitment,” he tells, “from recruitment of permanent to contract staff, to Key account management, to HR Advisory, to sales and acquisition, to the more managerial tasks such as being a key member part of developing the overall company strategy.” He is now Senior Business Development Manager, and is busy setting up the organization’s new Amsterdam office.

How would the brothers describe each other? “He’s the cheeky one,” says Kiri affectionately. “And he’s the techy,” Leonidas says without hesitation, “in a good way.” “That’s true,” Kiri confirms, “my whole house is wired up and I loved growing up in the Internet age and trying to figure out how to make technology work commercially, that’s what drew me to set up my own software company.” And what do they appreciate about each other? “He’s a rock,” Kiri says immediately, “I can call him day or night and I know he will be there for me.” “He’s got a big heart,” Leonidas states, “He is there for everyone, he is open-minded, and he will give everyone a chance. He would go out of his way for a stranger.” “I like to please,” Kiri explains, “I like to find a win-win situation, Recently, I read the book How to Be a Successful Bastard. It was… fun, but I completely disagree. It stated that successful people who appear nice are not nice at all, but that they are in fact ‘bastards’! In life you have to define what kind of success you want financial, family, career… and how you will achieve it. And of course, one thing that’s for sure is that is that you can’t please everyone however hard you try – yet there is no need to be disrespectful or walk over people to reach your goal.”

What is the brothers’ take on the Dutch employment market? Leonidas answers: “The Netherlands is a great place to come to work and to build a career. There are many international companies in areas ranging from Oil & Gas, Technology, and Retail, to EU organizations that are always looking for skilled international staff. And for people who move here it is easy to find their footing thanks to the great support the local cities offer through their expat centers.” Kiri notes: “And the Netherlands will continue to be a popular place for people to relocate to for work as there are more and more companies coming in from the USA, Asia, UK, Russia, etc. that are setting up offices in the Netherlands, attracted by the various benefits the Netherlands has to offer, such as the amount of highly skilled labor available.”

A few years ago, a survey revealed that expats were unsatisfied about life in the Netherlands. Has this improved? As Kiri has left momentarily to pick up his daughter Chloe at daycare, Leonidas answers: “I am sure it has. If you look at what they have here: good schools, an environment in which initially they don’t have to speak the local language, plenty of support when registering the local authorities and arranging a tax number, help with finding a house – it has become very expat-friendly. But it also depends on which type of expat you are talking about. There are young bachelors, who are looking for something different and who come here for two to four years, and you have families who move here for four to eight years.” Presumably, it is easier for bachelors to find their way? “You would think it would be. The Hague, for instance, organizes a lot of events to help people integrate and meet new people, but lots of times the bachelors stay within their own groups, with people they know from their own company. This can be very dissatisfying socially. On the other hand, families are exposed to different local groups from schools, to clubs, to neighborhood events, so they meet people in a variety of situations and from different environments. Which gives them a larger, more diverse social network.”

Is there anything the brothers would like to add? “How about survival tips?” they suggest enthusiastically, motivated by the previous subject. Sounds like an excellent idea. Kiri, who has in the meantime returned, starts: “Don’t be upset the directness of the Dutch, take it with a pinch of salt. As for things to do; join the crowd that jumps into the North Sea on New Year’s Day, embrace Queen’s Day…” as he takes a breath, Leonidas jumps in: “If you get lost somewhere, go in search of the local Grote Market (market square, ed.) grab yourself a cocktail from a little place called Vavoom then your find your way from there. And as for service…” “Oh yes, the service!” Kiri cuts in, fired up: “Don’t get so worked up about the service here. It’s different, so just lower your expectations. Don’t complain too much, relax.” “Eat before 10 P.M.,” Leonidas adds, “there are many good restaurants in The Hague for different taste buds and budgets, Pastanini for Italian, Pastis for French, Bistro Mer for fish, the Resident for steaks and ribs, the list is endless.” “Read The Holland Handbook or download the Ipad App!” Kiri advises, “it has the best tips about Dutch life; the government, taxes, social life, schools, housing – it’s a good investment. For a more personal individual approach, visit ACCESS at The Hague International Centre at City Hall in The Hague, or contact them via their Helpdesk. ACCESS volunteers provide a unique service: they can answer the questions of newly arrived internationals, based on their own experiences when they arrived. They are experienced expats in the Netherlands, who know what it is like, and they can help you navigate your way around and figure out what that blue envelope is!” “Learn the language, don’t wait,” Leonidas fills in, “don’t isolate yourself to the international community…” and as if on cue, both brothers say at the same time: “Integrate!” “…that would be my key word,” Leonidas says, as the brothers nod at each other with a smile, and he adds: “One of our mutual Dutch friends used to say to us: you live in The Hague, work in Rotterdam and party in Amsterdam.”