From the Point of View of… Jonathan Talbott 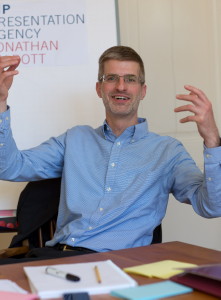 18 years ago, Jonathan Talbott came here to study at the Royal Conservatory in The Hague, which was founded in 1826 by King William I. The school is well known for its Early Music Department and Jonathan came here to do graduate work on Baroque violin: “The Early Music Department in The Hague is one of the largest, if not the largest, in the world. So I was very enthusiastic about coming here and working under the teacher of my choice. My wife, Nancy, who is a mezzo-soprano, was already working a lot in Germany at the time, so it was the right moment to come. Furthermore, we were looking for more opportunities as classical musicians and, well, since classical music comes from Europe, there simply are more opportunities here.”

Jonathan started playing the violin at age 4, made his solo debut at age 16, and entered the Eastman School of Music in Rochester, NY in 1988. After the conservatory of The Hague, where he studied from 1995 to 2000, he started to work as a free-lance musician and became co-director of Ensemble Braccio, a violin consort, and artistic director of Concerto Barocco, a Dutch Baroque orchestra. “Then, about five years ago,” Jonathan tells, “after having worked as a free-lance musician for a long time, I felt my career was just not going in the direction I wanted it to go. I was the music director of a Baroque orchestra, I had several chamber music ensembles – and none of them were really ‘flying’. I began to ponder this and realized that one of the problems was that I did not know enough about the marketing.” So he decided to take a course in marketing for the performing arts.

However, Jonathan says: “The week after I got my new certificate, the Rutte 1-cabinet raised the VAT for all arts-related activities from 6% to 19% and then halved the subsidies and halved them again. The orchestra went from 36 projects a year in 2008 – which wasn’t a living, but certainly a good chunk of a living – to 12 last year. Not the best time to be trying to enter marketing in the performing arts,” he notes. “Still, I made a marketing plan for the orchestra, trying to change how culture was being marketed in the Netherlands – but eventually I realized it was fruitless. You know the expression, ‘give a man a fish and he eats for a day, teach him how to fish and he’ll eat for a lifetime’… Well, the problem becomes when there aren’t any more fish in the pond. So I decided I needed to go find a new pond. And I did.”

“As is typical with someone changing their career, I spent a long time making lots of list; a list of what my skills are, what I like doing, and who I like doing it with – it’s a particularly good skill of mine; making lists,” he laughs. “When you’re a working musician, you develop a variety of skills, other than making music. There’s a lot of writing involved – not just thank-you notes and program notes – but concert proposals, and press releases and everything else… So you become quite media savvy. You also learn how to program websites, how to edit audio, edit video, and above all, to interact with people in various ways. I had all these skills, and the one thing I couldn’t figure out was what I wanted to do with them.”

“Then, one day, I met a marketing manager who worked for a company that sold oncology research – I never knew that companies like that existed, by the way – and one of the ways they do this is by going to conferences and giving presentations. She told me that they hired coaches to help these people make good presentations. And here’s where the penny dropped. I thought ‘wait a minute. There’s somebody out there that helps people stand up on stage and say their thing. I can do that!’ And I’ve been doing it ever since. Coaching and interacting with people, helping teams get where they want to go, assisting people with performance issues and helping people figure out what to say and how to say it effectively… this is stuff I was already doing in the music world – and I just translated it over to helping people make presentations,” Jonathan explains.

“Someone in the performing arts once told me, ‘the difference between an amateur and a professional is not the number of mistakes they make, but how they deal with them’. In other words, it is all about preparation and practice and learning from your mistakes. I had a student come up to me one day, who said; ‘I want to learn to improvise like you do’, so I explained to her just how much preparation goes into improvisation. I learned this while at the conservatory, from the jazz guys. They spend an awful lot of time in a room by themselves, trying stuff out. And they remember what worked and work it out even further, so that they remain with, say, ten options. Then they go to rehearsal and try these ten options together, each artist bringing their own. And some options go out and some stay in – and in the end, they have 12. The creation has happened already and it depends on the moment which option they use; the improvisation then becomes how they put it together on stage.” Summarizing this, Jonathan says; “In other words, in order to be able to wing it, you have to have a plan that you have developed through trial and error. And that’s how it goes with a presentation; you have to develop a structure so that you always know where you are. You have, say, three different stories ready that have the same function and, depending on your audience, you pick the story that gets the point across best.”

“I also help people with pitches – but I hate the term ‘elevator pitch’. First off, elevator rides in the Netherlands are not long enough for one – unless they go up three stories very slowly,” Jonathan hops in his chair with amusement, “And then, imagine you find yourself in an elevator with Bill Gates and he really means something to you. Assuming your mind doesn’t go blank or that you don’t say something wild like ‘I really like Word so much’, the chances that you are going to walk out that elevator with a job are still zero. Like winning a lottery ticket. I’ve never seen it get anyone any further than off the elevator.” He pauses a moment: “What you need to do is to find a way to have the other person say, ‘Hey, that’s interesting, can you tell me more?’ And then you can meet at a calmer moment, over coffee, or over the phone.” The next step is understanding whom you are speaking with, he explains; “Is it a business contact, your mother, a friend? This way, you can adapt your language in such a way that the other ‘gets’ it. Be sure to show a sincere interest in the other person, and to ask intelligent questions, so that you can have a good conversation. And remember; you are not only talking to the person in front of you – you are talking to everyone they know. Because you might not be able to mean something for them, or they for you – but they might know someone who can.”

Jonathan and his wife have been here for 18 years now (their two children, age 12 and 10 were born here), and: “One of the questions we frequently get from other expats is; ‘your Dutch must be pretty good?’ And it is, to be honest; 80% of my job involves speaking Dutch. But that is not the only reason I learned the language; it makes you feel a whole lot more comfortable in daily life if you speak the language of the country in which you live.” He acknowledges: “We chose to come and live here because of the low language barrier, but eventually it is exactly this low language barrier that works against you, because you remain afraid to go into shops and you end up living half of a life. You feel excluded because you don’t understand the letter that came in the mail telling you that, from now on, the garbage will be collected on Wednesdays instead of on Mondays. But also, instead of having a supermarket culture, like the U.S., here you have cheese stores, and fish stores, and poultry stores – and if you are afraid to talk to the shopkeeper because you don’t speak the language, you’re depriving yourself of good food, which is one of the joys of living here! And if you don’t understand the man who is asking you to move your car over just a little, so that two cars can fit in the parking area instead of two – you can end up in a conflict situation; either external because you think the other man is being critical and you end up in an argument – or internal, because you don’t react, but you still feel unjustly treated. Or frustrated, because you don’t have the language skills to help you cope with the situation. So you end up in a box, the silk-lined expat ghetto, I call it. You’re not suffering immensely, but you are not part of society.”

“I have sympathy for the people who come here two or three years to work for a multinational and have plenty of companies to help them get settled – you know, finding a house, a school, arranging their papers. For many of them, English is already a second or third language. But when three years unexpectedly become six years and you still don’t know how to get tickets, you don’t know how to complain about your parking fine, and you don’t go to the ballet because you’re not reading the brochures – then you don’t know what you’re missing until it’s way late in the game. I mean, we all came here for a year. It’s 18 years later and we’re still here for a year,” Jonathan kids. So how do you get out of that? “You have to consider the following question: Do you make your stay here an external or an internal event? Is it your choice to be here or are you here because someone made you? And, don’t forget; you can convert the one into the other. It’s quite simple: You can decide to be where you are, or you can decide to be where you left.”