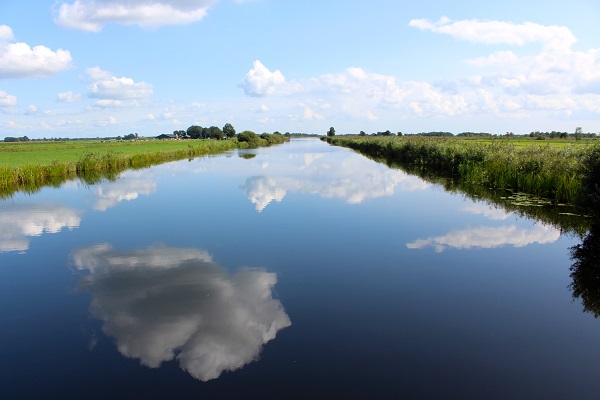 Though very few people know about it, it really should come as no surprise that this country, riddled as it is with canals, should have its own Venice. Not a city, though, just a picturesque little town called Giethoorn, located 121 km north-east of Amsterdam, in the province of Overijssel.

Giethoorn is located on the edge of the Weerribben-Wieden National Park – an almost entirely man-made park created over the centuries by the harvesting of peat, used to heat homes as far away as Amsterdam and Rotterdam. If you look at the map, you will see the ribbed pattern of higher-located lands where the peat was laid out to dry, and the lower drainage canals that were used to slough off water. The Wieden is the area where the peat was first harvested and where disastrous beginner’s mistakes were made before valuable lessons were learned. Water slowly took over the area, flooding the lands and creating lakes. Enough to make them uninhabitable, but still not very deep; if you take a whisper boat or a canoe (which you can rent almost anywhere) out onto the waters, you can see people walking alongside their boats – not because they are stuck, but simply because they can.

The Weerribben area was created afterwards and here is where the peat farmers applied a few hard-earned lessons. First, the canals were laid out running from north-west to south-east, and second, the drying fields were kept modest in size, avoiding the creation of large, open areas that were prone to settling. This part of the park, with its soggy grasslands and myriad canals, is quite different from the wide reed-lined lakes of the Wieden.

Weerribben Wieden National Park is so peaceful, versatile and beautiful, that it is best enjoyed slowly and entirely – by means of total immersion into the complete silence, interrupted by the almost hypnotizing sighs of the reeds in the wind. There are countless routes that you can cycle and walk (or else take to the waters in a canoe or whisper boat); if you get a hold of the map Wandelkaart WaterReijk (available at the VVV Tourist Centers as well as the Visitor Information Centers of the park) you can spend days exploring the area. And, if you end up in Blokzijl, St. Jansklooster or Giethoorn, you can take the EcoWaterLiner that runs between these three villages. Be sure to check its website www.natuurmonumenten.nl/ecowaterliner), though; there are not many runs a day and it only sails between the first week of May and the last week of September.

Be sure not to miss Blokzijl; the jewel in the crown of this area.