From the Point of View of… 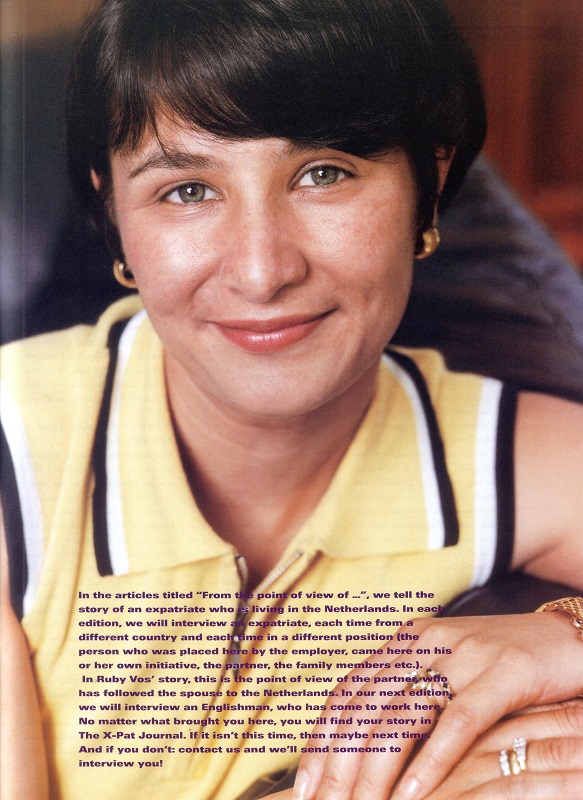 Our interview for this month took place in the soon-to-be former home of Mrs. Ruby Vos (she’s moving to a new house). Ruby moved here in 1994 with her Dutch husband. However, Ruby herself is somewhat Dutch, as her parents are Dutch, but emigrated to the United States in 1959, where Ruby was born. Ruby met her Dutch husband in the Middle East, where he was working with the U.N. Peace Keeping Forces and many years later, when he was offered a job in the Netherlands for the OPCW (Organization for the Prohibition of Chemical Weapons), they moved here.

What were Ruby’s expectations of the Netherlands? Ruby herself says that her expectations were influenced by her many visits to the Netherlands as a child. What she did not know, was that her experiences of the Netherlands were not necessarily a good indication of what life is really like here. This is because her parents are of Indonesian descent. And no matter how many generations they may have lived here, they have their own particular culture, which, in some areas, is significantly different, says Ruby. We asked her for a “for instance”. Well, said Ruby, a good example was in the area of food. If you enter an Indonesian home, there is always an abundance of food and you are always invited to partake of it. In a Dutch home, unless you are specifically invited to join in a meal, you shouldn’t expect to be invited to join in one on the spur of the moment. Usually, Ruby hastens to say. Because she always wants to make sure that we understand that she likes the Dutch and doesn’t want to say a bad word about them. She is trying to walk the fine line of pointing out what she finds different (“Which is not wrong,” she emphasizes) and what might sound as criticism.

There is another point Ruby would like to make about the Netherlands. She and her husband made a conscious choice to come to live here, because they feel that it is a safe place to raise children. She feels comfortable about her 7-year old playing out in the street or letting her 13-year old go on the public transportation. And that is worth a whole lot. And they are also impressed with the Dutch school system: they feel the Netherlands is a good place to get a good education. Though, by the time her children go to university, she would like them to go back to the U.S., as she feels the choice is wider there.

Ruby has lived abroad before. Still she says it was tough moving to the Netherlands. She had lived in the Middle East as a child and as an adult. Was it just as tough to move here? Yes, she said, but for an entirely different reason. When you go out the front door in the Middle East, you know you are in an completely different country with a completely different culture. But in the Netherlands, it all looks more or less the same as in the U.S., so that it comes as much more of a shock when things are so different. And what is so different? Oh, everything, from what you find in the stores, to how you interact at the stores. Not to mention, finding a doctor, visiting the doctor and consulting the doctor. Or making friends, or getting information. Or registering at the municipal office. A long, long list. And speaking of “long, long”, the long, long waiting times for anything that entails if only a smidgen of bureaucratic involvement. Which, in a bureaucratic country like the Netherlands, is almost anything.

How did Ruby prepare for coming to live in the Netherlands? “Well,” she says, “I have a wonderful mother-in-law. She came to stay with me in the U.S. three times for a period of three months before we moved here, and she told me what to expect. She told me what would be different, what I would have trouble finding, and she spoke a little Dutch with the children. In short, she was a big help.” Would that all expatriates who come to live here had that much luck.

Living among the Dutch

Being as how Ruby did not want to sound critical of the Dutch, we had to put Ruby on the spot sometimes, as we particularly wanted to hear what it is like to live among the Dutch as a foreigner (also the gory details). For instance, in our next question: What were the first things she noticed about the Dutch? Something that really surprised Ruby was the amount of free time working parents seem to have (the Dutch have a minimum of approximately 25 days of vacation per year, aside from national holidays, and many have an additional 5 to 25 days on the basis of certain laws). This means that when she goes to the beach on a beautiful sunny day, it is full of mothers and fathers, who have taken the day off to join their kids at the beach. To her great surprise, her hard-working, career-oriented neighbor dads and moms will come strolling by on a sunny evening: “Tomorrow is going to be such a beautiful day,” they say with a languid stretch, “I think I’ll just take the day off.” While her husband works long hours, and some weekends. Ruby is grateful for the occasional evening when he makes it home for the family dinner.

What are particular tips Ruby would like to share with her fellow expatriates. To this, she has very succinct answers. If your neighbor invites you for coffee, don’t worry about how you look, go. If they invite you to a birthday party, don’t say, well, that depends on what time my husband gets home, but if he’s home on time, we’d love to come. Go. And, for any appointment, be it social or business, casual or formal, be punctual.

Ruby must, towards the end, confess that she has found that there is one thing about the Netherlands that is to be considered negative. Though not for her, she hastens to add, still not able to say something completely unkind. And that is the weather. These long, dreary, gray, rain-filled winter months drive many a foreigner to the brink of depression. And what can you do about it? Ruby works in the garden, she thinks the weather circumstances are just ideal for that.

We asked Ruby to use five words to describe the Dutch. After some thought, she came up with the following: open-minded, liberal, frugal, environmentally and socially conscious and good business people. Frugality always helps a person do good business, she adds with a smile.

Ruby has a word of advice, which in retrospect applies to anybody who goes to live abroad, being the Netherlands or anywhere else. On the one hand, she said, if things are very different – in your eyes – remember that you are the one who is visiting another culture and they are not going to change just to accommodate you. The fact that you are different, is, though it may sound hard, your problem and not theirs. But on the other hand, make sure you inform yourself of your rights: don’t let others bombard you into doing things the way they feel it should be done. Find out what your rights are and exercise them, if they are important to you.

A job for the partner

For many spouses who follow their partner to the Netherlands, work is an important issue. Is Ruby looking for a job? “A paid one, you mean?” she answers with a significant look. Ruby is very active in welcoming her husband’s many new colleagues and their families who have been transferred to the Netherlands over the last four years. She was Vice chair of the Spouses Committee until May of this year, and is currently a volunteer for the Institute of Social Studies with their “Meet the Dutch” Program, and a member of the board of the parent-teachers association for the local Dutch school that her two sons attend. Right now, she doesn’t know where she would find the time to squeeze in another job. “Besides,” she says, “life is for living and I want to have time to have fun, too.”

Ruby has registered with employment agencies, but has found that simply being active and getting out there is the most effective. Her many contacts, friends and hobbies have provided her with a great network: for her, the offers for full-time, part-time or in between-time jobs really never stop coming.

As you will have noticed by now, just about everybody in the Netherlands speaks English. Does this mean that you can get by without learning Dutch? No, says Ruby. Once they know that you are going to be here for a while, they expect you to learn Dutch at some point. But Ruby says she has found a wonderful way to learn Dutch. She went to the Educatieve Centrum in The Hague. Here they work with computers and lectures. The computers make use of CD-roms, which run you, for instance, through some domestic problems. For instance, should your faucet go on the blink, it will tell you what a faucet is, in Dutch, what its problem is, in Dutch, who to call and what to tell them – all in Dutch. She finds that this combination of learning and practical situations is very useful.

What to do, now that you are here?

What would Ruby advise you to do, now that you are in the Netherlands? Ruby says you should try and see the Netherlands from the water. You can go to Giethoorn, an old Dutch village in the Province of Overijssel and rent a little motor boat and motor your way through town, Venice-style. Time stood still there, with old, thatched-roof houses and tiny canals, old bridges and big over-hanging trees: you really get to see the Netherlands as it once was. But you can also rent a canoe and paddle your way through the country-side, villages or cities – you see the Netherlands from a wholly different angle. Other recommendations are visiting Volendam, another old village, or the Veluwe, one of the national parks which lies east of Utrecht.

And, finally, a word for the cautious: when you’ve parked your car… check and see of there is a bicycle coming before you fling open your car door!