From the point of view of… 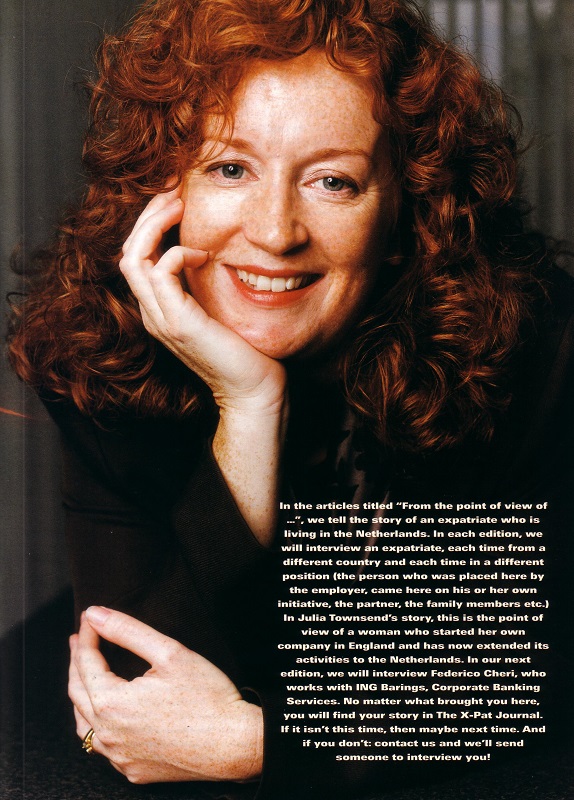 Julia Townsend has her own business in England. On the day she landed a big contract, she came home jubilant, hardly able to wait till her husband came home, so that she could tell him the good news. As her husband, Steve, walked in the front door, they simultaneously said: “Guess what?!” Steve finished his sentence first: “We’re moving to Holland!”

Preparing for the move

Steve’s transfer was so sudden, there was no time to prepare. As it is, Julia came over a few months later as she has a business to run. There wasn’t even time to take one language course. The closest they came to preparing was by getting to know a Dutch couple on their honeymoon a few years earlier, which turned out, in fact, to have been a pretty good preparation as their new friends were wildly enthusiastic about the fact that Julia and Steve were moving to the Netherlands – and lent them a helping hand whenever and wherever they could. These friends helped them, among others, in their search for a house, driving them through the various neighborhoods of Den Bosch, where Julia and her husband had decided they wanted to live.

Has Julia learned Dutch in the meantime? No, unfortunately not, says Julia. First of all, there hasn’t been the need to: her business is in England and is still running marvellously while her clients in the Netherlands (Julia, entrepreneurial as she is, has simply extended her activities to include the Netherlands) are mostly international or internationally oriented so that Julia can simply work in English. Julia is very impressed with the language skills of the Dutch, but is mostly very relieved: she finds the prospect of learning Dutch quite daunting. Her feeble attempts, however, she says, are met with much enthusiasm: particularly one of her clients’ secretaries becomes wildly enthusiastic when Julia greets her with a “Goede morgen!”. For the time being, Julia and her husband visit their neighbor once a week for conversation classes – which are very effective, according to Julia: “My neighbor’s English has improved tremendously,” she remarks with a grin.

What would you fancy, Madam?

Julia is pregnant now, too. In the former issue of the X-Pat Journal, you could read about having a baby in the Netherlands: to the shock of many visiting expatriates, the Dutch believe in natural child birth, preferably at home – without painkillers. Especially the latter greatly surprises Julia: in this country where you can simply walk into a “coffee shop” and buy hash cakes, cannabis and many other fascinating variations on this theme, she had half expected to be presented with a colorful tray displaying a tasty choice and a helpful “what would you fancy, madam?” On the other hand, the obstetrician has guaranteed Julia that there is a team of ‘young, keen anesthetists’ on hand at the hospital – at which point Julia envisions teams of young, white-coated doctors, lurking in dark corridors with big needles in their hands, waiting to be called … She still has not made up her mind whether she’s having her baby in the Netherlands or England.

As mentioned earlier, Julia has her own business (JMT Solutions Ltd.) which gives IT-training in Microsoft products, and, as an extension of this, project and program management support. As Julia runs a portion of her business in the Netherlands, we asked her what it is like to work here – as a woman. Julia answered that she is particularly surprised by – there is no nicer word for this – the sexism in the Netherlands. To her surprise, there are very few women in high positions – while those that are, constantly have to work hard to prove themselves. Julia has spoken with a few of these women and they have told her that, if they start in junior positions, they often have to leave the company as they climb up the corporate ladder as they never seem to be able to shake other people’s view of them as secretary or junior assistant. Also Julia has found that, even though she runs her own company, it is not easy to get accepted by the men she does business with. Often, it is assumed that she is the secretary (“When did your boss say he was coming?”) and she finds it hard to hold her own in a meeting as she is often interrupted, ignored and scarcely acknowledged (which is hard to imagine when one is sitting across from her, with her fiery eyes and her go-get-‘m attitude). Julia spends a lot of her time convincing the other party that she is the right person for the job, whereby she finds that she often has to justify her presence in the meeting in the first place and that she has to spend far more time than a male counterpart would have to, proving her credentials. How does she counter this? The solution she has come up with is to go for the “quick win”, as she calls it, “buying” her credibility by acting quickly and/or solving a problem quickly thereby establishing herself as a competent and knowledgeable party.

As Julia describes it, the Dutch are “very well aware of the fact that they are a small country in a big land mass”: they have learned their languages well as they understand that they have interact with all these other cultures. As mentioned earlier, this has greatly facilitated Julia’s company’s expansion into the Netherlands. There is no doubt that the language skills of the Dutch are definitely a plus, when one has to do business with them. However, one must not confuse their language skills with their diplomatic skills, she warns good-naturedly: their manner of communicating still comes across as awfully direct. Julia explains this as being largely a “language thing”: English is not their native language so that they do not have the tools to express themselves as subtly as they might in Dutch. Also, says Julia, the Dutch have very strong opinions, which they do not hesitate to express, sometimes to the point of sounding downright dismissive. But, again, she says, this is largely due to choice of words and the intonation – and the fact that, compared to what she is used to, the Dutch are simply a loud people, so that she sometimes finds it hard to judge whether they are upset or amused.

What is it like to acquire new business in the Netherlands? “Oh, it is quite different!” she exclaims. And how is that? In England, when Julia wants to sell an idea, she takes the direct approach: she goes right to the top of the company, contacting those in the upper management-level and holding her sales pitch. After that, it is simply a matter of waiting for their decision – which never takes long. In the Netherlands, she has learned through experience that a different approach is more effective – one that she sums up with the term “bottom-up”. It is far more time-consuming, requiring one to “bang on a lot of doors”, repeat the same story behind each of these doors, and sell the idea “to the masses” in order to get their support. Only with their backing, can one go about banging on the doors of management, after which one still has quite a considerable wait before they make up their minds. Also at this level it takes time to digest the provided information and come to a decision. As Julia says, Dutch managers do not want to make the decision on their own. Compared to what Julia is used to, this creates the impression that the Dutch do not have quite the same sense of urgency she has (but then again, wasn’t Julia the fiery, go-get-‘m one?).

As in every interview, Julia is asked to use five words or phrases to describe the Dutch. After much thought, during which various emotions flash across her expressive face, Julia comes up with the following: laid-back, loud lager-drinkers; friendly; generous; and party animals. But, she adds, she has heard that this is very much a southern Dutch set of traits (she has not had much experience with the northern Dutch). Many are the hours she has spent drinking away happily a Dutch bar until deep in the night (though pregnancy has somewhat put a crimp in that style), discussing the world and coming up with very sound solutions.

What does Julia recommend you visit in the Netherlands? “Oh, the Efteling!” she exclaims enthusiastically, “It is a fairy-tale world, gorgeous, well-organized and it appeals to all ages, from ‘white-knuckle’ rides to Cinderella.” Other than that, Julia is very enthusiastic about Den Bosch. She particularly enjoys the weekend when the carnival song for the next year is selected, whereby several brass bands go marching through the city all day, playing their song – at the end of which a song is selected. “You can’t hear yourself think,” she says delightedly. Furthermore, says Julia, you feel safe in Den Bosch. There’s the partying, the packed bars and the late nights, but all this without the druggies, fights or violence. “Come to the Jazz Festival,” she invites, “It’s great!”            ■